In our “Business of Audio” series, we have explored topics that have been commonly overlooked in the audio discussion, such as how audio is more than just podcasts and why we cannot forget the monetisation aspect. However there is another topic that does not always get the airtime it deserves: how audio is developing outside of the Anglosphere. Join us as we dive into how European publishers are using audio.

Audio expanding beyond the Anglosphere

While there is a debate on if we have reached “peak podcast”, many European countries are still increasing their podcast usage. A study from Reuters found a wide discrepancy between European countries on how many people had accessed a podcast in the last month. For example, 40% of respondents in Spain had listened to a podcast in the past month, while only 18% in the UK had.

We know publishers across the globe are all questioning how they can develop a stronger relationship with their readers. An important first step in this journey is understanding your audience very well. Danish media company Zetland asked its readers what they wanted more of, and the response was overwhelming — more audio content!

Instead of demanding that ‘we like written word so you have to read our stories,’ we try to get a sense of how can we adapt to your world and your way of living.

In Europe, technology is catching up with this demand for audio, with the Amazon Alexa app recently topping app stores across Europe on Christmas morning, and Amazon Echo Dots in France, Germany, and Italy temporarily sold out earlier this year. We can only expect the importance of audio to increase as more and more languages and countries are added. One report forecasts a compound annual growth rate of 57% for smart speaker adoption in Europe, leading to 36% of all European homes having a smart speaker by 2021.

In our own customer base of newspapers on our ePaper platform, we can see how more mature markets in Europe have already been experimenting with audio for a while now. In Germany and France, which were some of the first European countries with access to smart speakers, many audio projects take the form of news flashes. For example, Berliner Zeitung has a weekly podcast of just a few minutes, in which editor-in-chief presents some of the top stories of the week. We’re also seeing interesting experimentation with how podcasts are distributed, such as how Ouest-France places their short news briefing podcast in the beginning of their digital-only newspaper, L’édition du Soir. 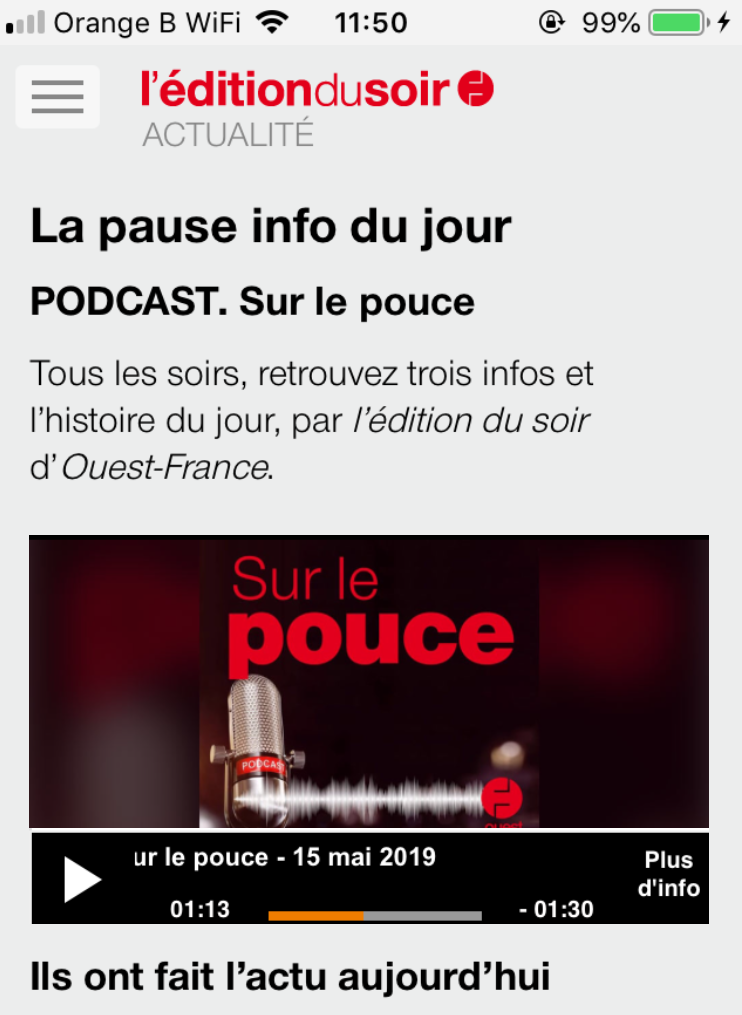 A way to reach younger audiences

Audio has helped European publishers overcome some common challenges, such as reaching a younger audience and building stronger relationships with subscribers. We know many European publishers are grappling with how they can develop habits forming products, and audio is one way they are experimenting with this.

Aftenposten, Norway’s largest newspaper (and owned by Schibsted), took a cue from The New York Times and their runaway success with The Daily. In early October 2018, they launched the daily podcast Explained, which gives listeners an in-depth look at one news story, told by Aftenposten’s own journalists. As Norway is a small market, they set a goal of 10,000 daily listeners, which they quickly surpassed and reached 30,000 daily listeners in the first three months. This work paid off for them, with 70% of listeners below the age of 35, meaning they are able to reach a much younger audience than via other digital channels (their average digital subscriber is 40 years old) or print (their average print subscriber is 60 years old).

The best part though is the loyalty this product has engendered, with listeners creating a new daily habit. 80% of listeners come back every day, even when there is no promotion for the new content. This aspect of habit formation is something we are particularly interested in at Twipe, and we will be covering how to create such habit forming products at the next Digital Growth Summit in October. Make sure to sign up to receive an invite.

With non-English speaking countries entering the audio landscape a bit later, at least in terms of smart speakers, there’s room to learn from those that went ahead. As we saw above, smart speakers only came to Spain last year. Carlos de Vega Gonzales, deputy editor of El País, explained to INMA that across Spain many smart speakers were gifted for Christmas, so this year he expects audio to really take off. Spanish publishers are also able to make better use of their audio content, as they are able to learn from what had been done in the US and other countries with early access to smart speakers.

We are making money, and that’s been very surprising because we’ve been working in video for the last five years, and it’s very difficult to get money for video. During this six months working on audio, even without having a commercial team working on the programme, we already have two or three companies that want to sponsor our content.

There’s also room for new learnings to share with the English-language audio market. For example, German daily Nordwest Zeitung has experimented with what types of content are most successful in audio. Two topics stood out: traffic and obituaries. Traffic updates in audio make sense, a holdover from radio, but the team updated this format: now listeners can have real time traffic updates for their neighbourhood by simply asking Alexa. The importance of obituaries was a more surprising learning, they account for 15% of all audio requests for Nordwest Zeitung. Not all content is created equal, and this is doubly true for audio.