In our business of audio series this year, we’re exploring how publishers can monetise their audio content, whether it be longform podcasts, news briefs for smart speakers, or something in between. Often this conversation on audio for news has been dominated by podcasts however, with the revenue model for smart speakers ignored. Inspired by a question asked by Renée Kaplan of the Financial Times at the International Journalism Festival, we’re digging deeper into smart speakers and how publishers should be utilising this platform. Join us all year as we dig deeper into the business of audio, subscribe for updates and send us your questions.

Limited use of smart speakers for news

We all know smart speakers have been growing in popularity, especially in English-speaking countries. But just this week it was announced that smart speakers are expected to overtake tablet usage by 2021. 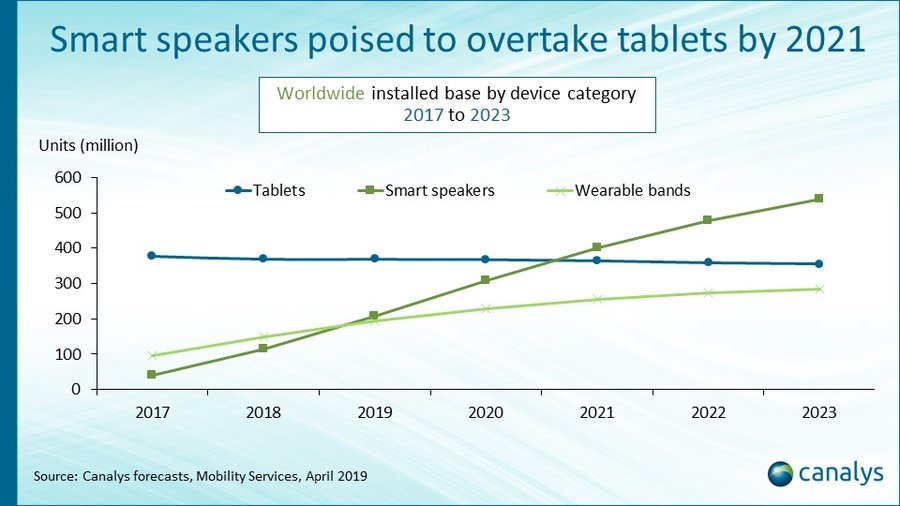 While we see smart speaker adoption is growing, does this mean more users are actually using them to consume news? The answer is not as straightforward as it would appear. Findings from NPR and Edison Research show that 73% of owners said news and current affairs were the topic they were most interested in using a smart speaker for. However a report from Reuters Institute gives a different story, with most smart speaker owners having not accessed news briefings on the device in the past month–and in the UK, just 1% of owners state news is the most important function of the speaker. The report finds a concerning discrepancy, the difference between how widely used news is used on smart speakers versus how low it is valued.

Even those who do use the device for news often are unaware of the full breadth of news content, usually only using it for short briefings. There is also confusion on how to access content from preferred news brands. Many users do not personalise or change the news settings on the devices, so the default news providers have a significant advantage (such as the BBC in the UK).

Many publishers are still hesitant to invest in audio news content for smart speakers due to the unclear path to monetisation. Instead we see publishers focusing more on longer audio content such as podcasts where the existing revenue models can better transfer, through either advertising or subscription.

For publishers investing in short news bulletins for smart speakers, they often view it as an investment in their acquisition strategy. Publishers such as The Washington Post or The Economist use smart speakers to direct listeners to offers using special URLs. Still, other publishers are inserting ads in the short news briefings, and indeed those ads are often listened to entirely. Research on Alexa usage found that people are much less likely to skip ads, as they find it more inconvenient to tell Alexa to skip forward than to just let the ads play.

We can expect to see more subscription models for smart speaker news content coming in the future, something that will undoubtedly be enabled by the platforms.

Ultimately, there will be an opportunity to build premium audio experiences as part of subscription packages and the platforms are very open to this.

A Reuters Institute report interviewed users of smart speakers to understand what works and doesn’t work on the platform. Overall, they found many users complained about the quality of news briefings, with six main concerns:

When we look for successful example cases to learn from, we can see even the most established players are still experimenting. For example, even though “The Daily” has been widely successful in its podcast form, The New York Times realised they had to switch away from having it as the first option on smart speakers, moving to a shorter news briefing instead. We even see publishers experimenting with push notifications in audio form, such as The Washington Post which alerts listeners when there is a new story available on Amazon Echo. Quartz is also a good example of offering more than just one news briefing per day, using two reporting bots (“Brian” and “Kendra”) that automatically read the first five stories on its mobile app.

Additionally, there is wide room for publishers to experiment and innovate in this field. There are limited examples of truly revolutionary news content on smart speakers, instead audio is often just repurposing online content and not doing anything that would not be possible without voice.

Ultimately smart speakers are still a territory to be explored for publishers, as we still have limited data available, especially from non-english speaking markets. Join us as we continue the exploration all year in our “Business of Audio” series.