Last year at Twipe we launched the research series ‘Reinventing Digital Editions’ as part of our research on successful digital publishing strategies. In the first chapter, we examined the rising trend of digital-only editions —  newspapers that are digital-only but still in the edition format. After publishing our findings, we heard questions about the readers of these products, such as La Matinale from Le Monde, Espresso from The Economist, or L’édition du Soir from Ouest-France. Who are the readers that prefer to read in the edition format? What can we learn from their news reading behaviours? So we embarked on the second chapter of our research journey, expanding our research into the news habits and attitudes towards paying of readers across Europe and the US. We spent months surveying 4,000 readers, and interviewing 30 of them to dive deeper into their responses.

In this article we highlight some of our conclusions, the full report is available for a free download here. 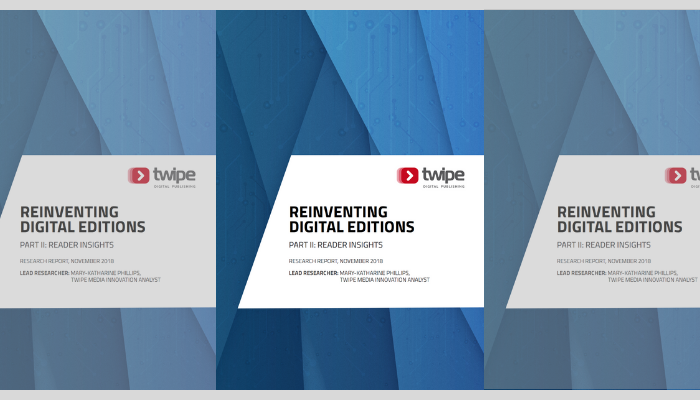 TV is still main medium for news consumption, except for younger audiences where social media prevails

To best reach their audience, publishers need to understand how people today prefer to receive their news. We asked readers how they had consumed news in the past week, we split our findings by age group as this is where we saw the biggest discrepancy. For news consumers 35 and older, television still remains the most common news source. However, for the under 35 group, social media is how they more commonly consume news. Still, we have seen before that there is a decreasing reliance on social media for news consumption, with Reuters reporting it is down 20 point for young readers in the US. 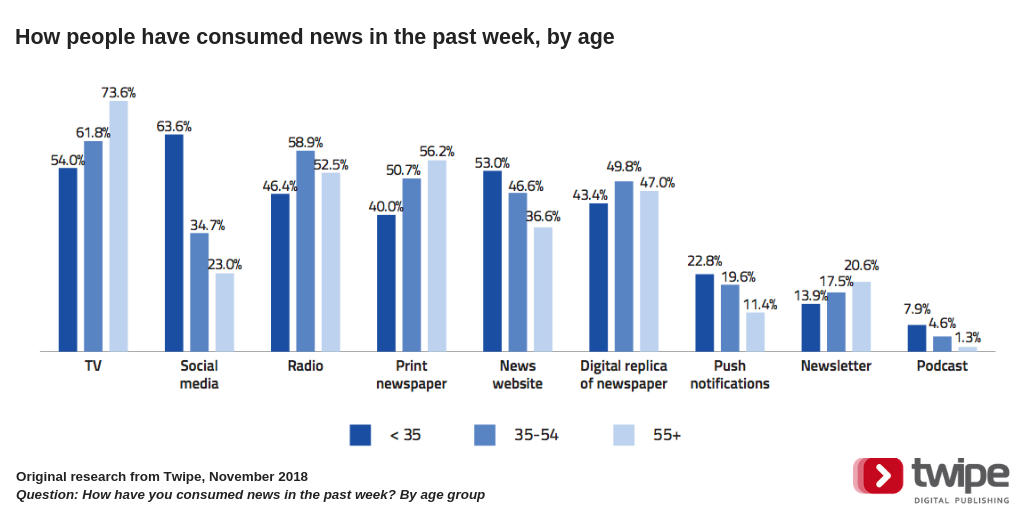 These trends are slightly different in each country we studied (Belgium, France, Germany, Spain, Switzerland, the United Kingdom, and the United States), full country profiles are available upon request.

As solving the funding crisis for journalism is a key topic of concern in the news media industry, we examined the readers through their a payment lens in part of our survey. Depending on whether they had paid for online news in the past year, we asked respondents different questions. For those who had not paid for online news, we asked the main reason(s) they did not pay, and it comes as no surprise by far it was because they could already find plenty of free content online.

To help combat this, more and more publishers are setting stricter rules for their paywalls. We’ve seen before that industry-wide the most successful paywall strategies aim to reach 5-10% readers. For most publishers, this will be around 5 free stories per month — which is where The New York Times is now, after originally starting with 20 stories.

While globally not many respondents cited their lack of trust in news for why they do not pay, this was significantly larger in the United States (17.5%) and the United Kingdom (12.5%).

On the other hand, readers who do pay for digital news cite a lack of free content in their preferred format as the main reason why they started paying. 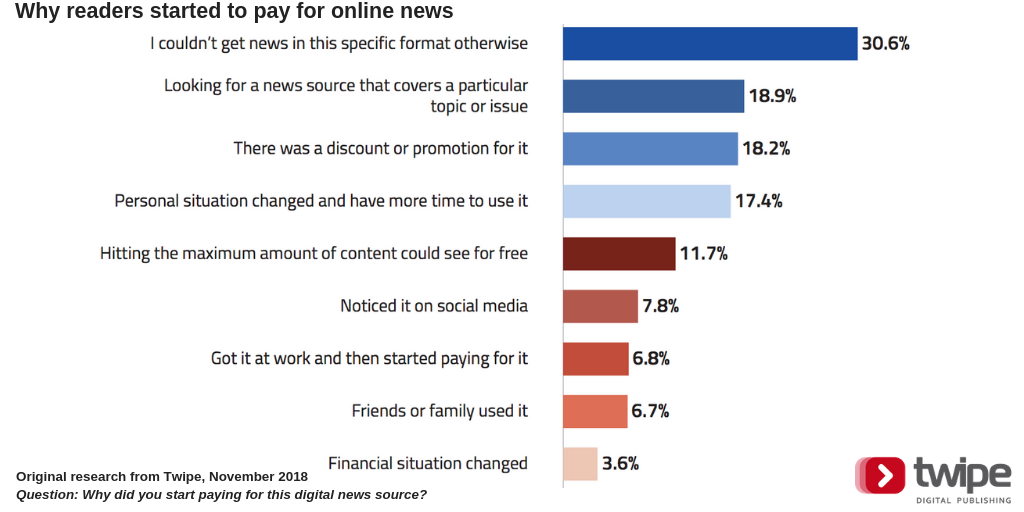 That’s why we also examined readers through their news format preferences, to understand which format they are missing out on. We looked at the two most common formats, editions and newsflow.

Globally we find an even split between the two formats, this holds true across age groups and countries as well. Two of the reader interviews we conducted best explain the different habits these formats address. 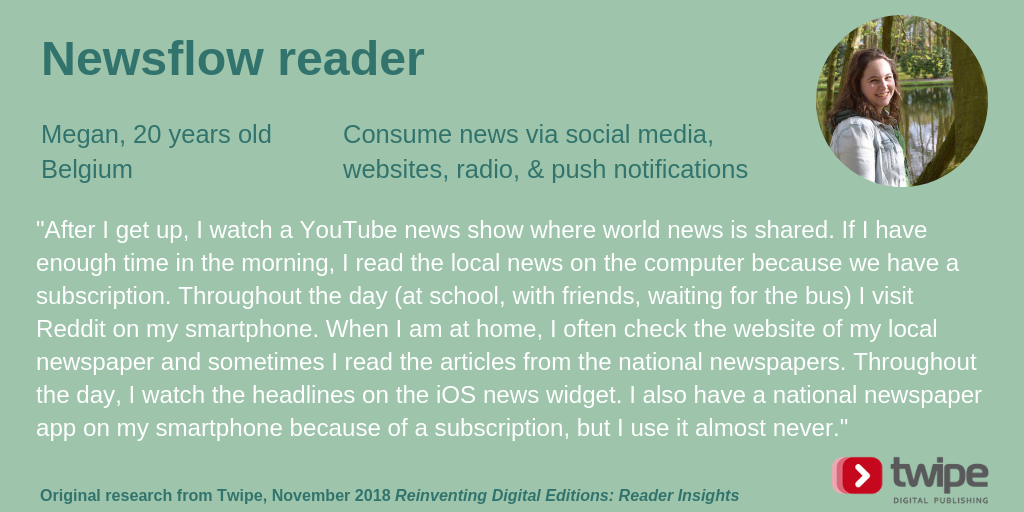 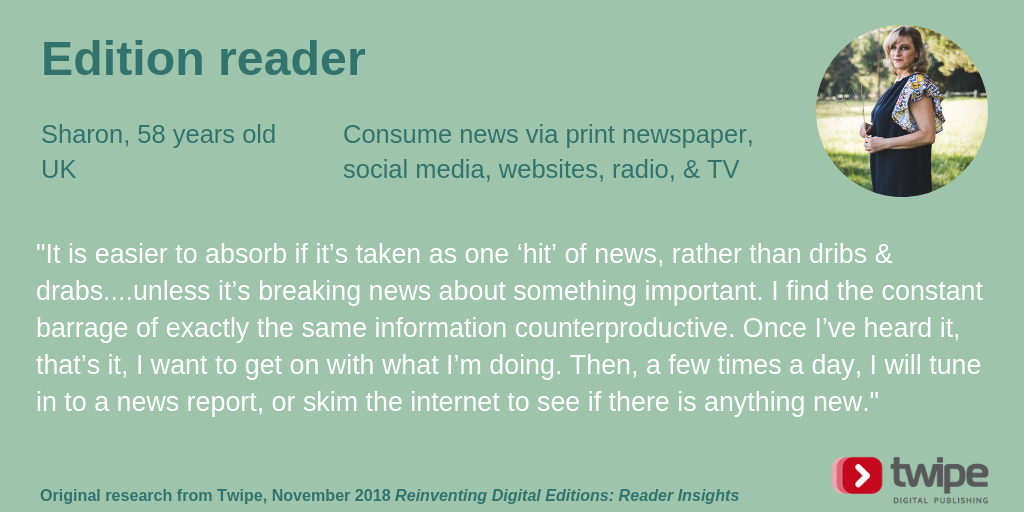 We look forward to continuing our research on successful digital formats for news, if you have any questions, comments, or ideas please share with us!